Based on the book The Stranger by Albert Camus

Anastasia Trizna, Yasmin Ahsanullah and Maija Ruskanen explore the notion of alienation described by the book of Albert Camus; The Stranger (L’Étranger).

The story starts with two persons (Anastasia and Maija) reading the book of Albert Camus in the metro from Tapiola to Mellunmäki.

The journey in the metro with the change of its passengers (from the cliché of “Finnishness” in west Helsinki, to the multicultural crowd in the center of Helsinki to the poor and immigrant residents -Somalis, Arabs, Russians- in East Helsinki) defines the dramaturgy of this performance. 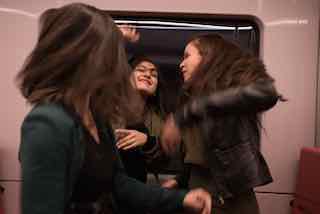 In this performance, while the performers discuss, re-enact, re-tell the story of Meursault, the protagonist in The Stranger novel, they compare Mersault’s events with their own life and realize that even though they are Finnish citizen living in Finland they are also foreigners. The sense of belonging to a community is a social construction, which it can be easily broke down. In order to prevent the crumbling of this social construction, myths are deployed. But these myths are masks which can also alienate not only the foreigners but also the one wearing them.

The book, whose original title (L’étranger) evokes a sense of being foreigner is translated in English as the Stranger, emphasizing the notion of alienation. The Finnish translation, Sivullinen, the Bystander opens up another approach to the text which could bring it closer to the very experience of theatre, where “bystanders” (spectators) are witnessing, from afar, events displayed in front of their eyes. 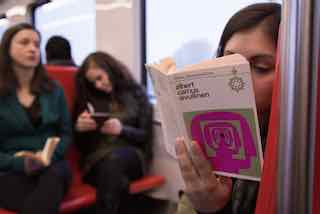 This performance, which combines story telling with rock concert and psychedelic rap-rave, aims to disrupt the traditional notion of a show in order to make the audience experience the process of alienation. Through strong music, the protagonists seek to feel something, seek to belong to something or somewhere, but they cannot. Something is always in between impeding them to grasp their life. They have the feeling that their life is simply absurd, because, as it ends in Camus’ novel, the universe is indifferent to the fate of humankind. By considering the three different approaches to the book, foreigner, stranger and bystander, the show will be an examination of the mechanism that prevents someone to live “fully” her/his life.